The setting was well suited for the speakers (Manny’s has held event for 17 out of the 20 Democratic candidates to the US Presidential election), and the two accomplished scientists shared many thoughts on their unsuccessful run. Needless to say, getting into the political arena is not an easy task, and it takes a lot of courage.

A man’s life is interesting primarily when he has failed — I well know.
For it’s a sign that he tried to surpass himself
— George Clemenceau

While there is a lot of work done in the realm of science policy (how to inform our representative and make sure they make evidence-based decision)—groups such as the Union of Concerned Scientists, Engineers and Scientists Acting Locally (ESAL) or closer to me the Berkeley Science Policy Group and interesting programs such as the AAAS Science & Technology Policy Fellowships— very few scientists do engage politics frontally, as candidates.While other countries do have trained scientists at their helm (Angela Merkel from Germany and Xi Jinping from China are both doctors in Chemistry, and their respective term have been relatively successful up to this point), other countries not so much. Currently, Rep Bill Foster (D-Il), Steve Englebright (NY state assembly) and Dan Kalb (Oakland City Council) are scientists in public offices; Vern Ehlers and Rush D. Holt were the first physicists to be elected in congress (party did not matter so much, Ehlers being a Republican and Holt a Democrat; see College Professors Who Have Served in Congress – The Chronicle of Higher Education (June 2014) for a partial list)Interestingly, a few rising stars (or shining bright already!) of the Congress are professors (but not scientists): Katie Porter, Kirsten Sinema, Elizabeth Warren. Jess Phenix is a geologist who has ran for the House of Representative; she has still been unsuccessful, but her time might come.
https://vis.sciencemag.org/midterm-science-candidates/(edit 11/8/2019: note that Olivier Ezratty published a post on “Do we need more scientists and engineers in politics“, quite thorough (in French.) And if you speak French there’s this podcast on Les sciences peuvent-elles aider la démocratie?  (“Can sciences help democracy”) featuring Philippe Kourilsky (author of De la science et de la démocratie) – I was a bit disappointed: it’s mostly about scientists helping democratically elected leaders, not participating in it, but at least there’s some conversation. 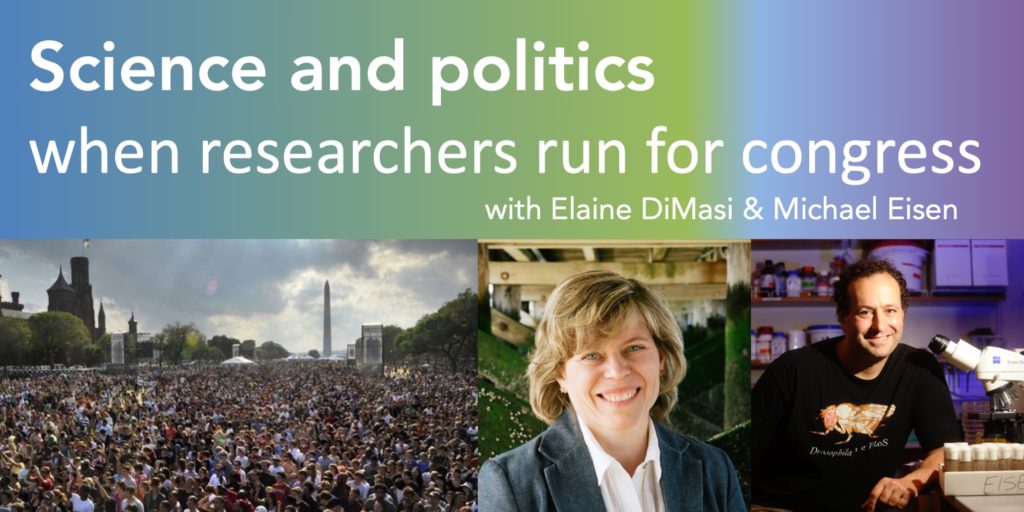 Science and politics: when researchers run for congress

Science and technology is at the heart of modern ways of living, from planes to cell phones, yet scientist are under-represented in congress, where their voice is hardly heard. “Listen to the scientists,” said environmental icon Greta Thunberg in her recent testimony in Congress. The emergence of alternative facts in the Trump era has pushed a handful a scientists across the country to the political arena.The scientists Elaine DiMasi and Michael Eisen will share their motivation for running and their experience engaging politics, how they found support, but also their advice on how to engage the public with science  and the best ways to get lawmakers’ attention.“It would be really nice to have scientists ask the questions of the Cabinet appointees,” says Michael Eisen, “because the senators don’t seem to understand the issue and aren’t asking the right questions.”
Link the even registrationDr. Elaine DiMasi is a staff scientist at Berkeley Lab, where she leads the optical systems group for the upgrade of ALS, a particle accelerator used for basic science experiments. She ran for the Democratic primary for the US House of Representative (NY-1) in 2018, after leaving her scientist position at Brookhaven National Laboratory, before joining the Bay Area in 2019.Physicist hopes the evidence is clear in bid for New York congressional seat – Science
Elaine DiMasi Represents Progressive, Evidence Based Policy for New York’s 1st – Medium
Everyday Women and Congressional Candidate Elaine DiMasi on Women’s Rights and Empowerment – Daily Kos
Elaine DiMasi: running for office – Physics World
Interview with Elaine DiMasi, Candidate for New York’s 1st Congressional District – The Daily Banter
Physicist learns hard lessons about money and leadership in U.S. politics – ScienceDr. Michael Eisen is a professor of biology at the University of California Berkeley. In 2018, he ran in the primaries for the California seat in the US Senate. He is the founder of Public Library of Science (PLoS), a pioneering open access academic journal based in San Francisco. He is part of the scientific advisory board of Impossible Food, a vegan food company.Geneticist launches bid for US Senate – Nature
In Age of Trump, Scientists Show Signs of a Political Pulse – New-York Times

‘Listen to the scientists’: Greta Thunberg urges Congress to take action – The Guardian

Freedom to Bully – How Laws Intended to Free Information Are Used to Harass Researchers – Union of Concerned Scientistsedit February 1st, 2020: I came accross this piece on Bruno Latour as a post-truth philosopher:

Rush Holt Jr., a physicist who served for 16 years in Congress, described the March for Science as a turning point: People, he said, were realizing “that they need to defend the conditions in which science can thrive.”

Latour believes that if scientists were transparent about how science really functions — as a process in which people, politics, institutions, peer review and so forth all play their parts — they would be in a stronger position to convince people of their claims. Climatologists, he says, must recognize that, as nature’s designated representatives, they have always been political actors, and that they are now combatants in a war whose outcome will have planetary ramifications. We would be in a much better situation, he has told scientists, if they stopped pretending that “the others” — the climate-change deniers — “are the ones engaged in politics and that you are engaged ‘only in science.’ ” In certain respects, new efforts like the March for Science, which has sought to underscore the indispensable role that science plays (or ought to play) in policy decisions, and groups like 314 Action, which are supporting the campaigns of scientists and engineers running for public office, represent an important if belated acknowledgment from today’s scientists that they need, as one of the March’s slogans put it, to step out of the lab and into the streets. (To this Latour might add that the lab has never been truly separate from the streets; that it seems to be is merely a result of scientific culture’s attempt to pass itself off as above the fray.)

Of course, the risk inherent in this embrace of politics is that climate deniers will seize on any acknowledgment of the social factors involved in science to discredit it even further. In a New York Times Op-Ed, a coastal geologist argued that the March for Science would “reinforce the narrative from skeptical conservatives that scientists are an interest group and politicize their data, research and findings for their own ends.” This was what happened in the infamous 2009 incident now known as Climategate, when emails to and from scientists at the University of East Anglia, a leading center for climate research in Britain, were hacked, revealing exactly the kinds of messy debates that Latour documented in “Laboratory Life.” Climate skeptics cited this as proof that the scientists weren’t really discovering climate change but simply massaging the data to fit their preconceptions. Certainly the incident did not, as scholars of science and technology studies might have hoped, lead the public to a deeper understanding of the controversy and negotiation that govern all good science in the making.